Gandhi once said, “Be the change you want to see in the world.” Those words have encouraged countless people to improve their realities. Some, however, go far beyond. All around the world, women are working hard to improve the lives of countless people in their communities. They often do this selflessly, and without need for thanks or recognition, but today, we’re giving them the spotlight they deserve.

Read on to learn about four incredible women who are changing their communities for the better. 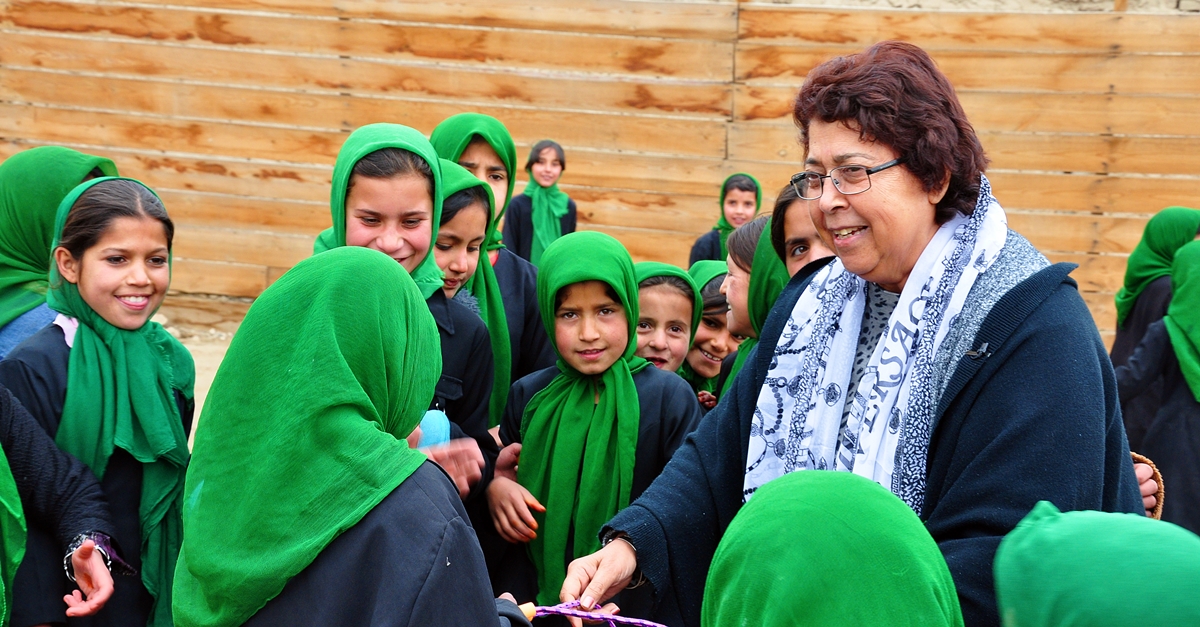 Founder of the Zabuli Education Center, Razia Jan has worked tirelessly to bridge the gap between Afghans and Americans. Born in Afghanistan and living in the United States since 1970, Razia’s Ray of Hope Foundation has organized countless humanitarian campaigns and won many awards for her work, including being named a Top 10 Hero by CNN.

In Deh’Subz Afghanistan, Razia’s Ray of Hope Foundation runs the Zabuli Education Center, a girls’ school which is helping to repair years of damage done by the Taliban when they outlawed education for girls and women in 1996. Before the opening of the Zabuli Education Center, girls in area villages had no way to obtain even the most basic formal education. The free education it provides is invaluable to the girls and critical to the peaceful rebuilding of Afghanistan.

You can be a part of Razia’s efforts to educate girls in Afghanistan. Your donation helps cover the cost of safely transporting girls to school.

Christine Low is a Chinese American educator. Now the Executive Director of Friends of Matènwa Inc., she is a Vassar graduate, and got her master’s degree in Creative Arts and Elementary Education at Lesley University. She divides her time between two very different worlds, one full of well-known academic institutions, in Cambridge, Massachusetts and the other, one of the most resource poor areas in Haiti, on Il de La Gonâve.

“Back in 1995 I took a year off from my job to volunteer in an adult literacy program in Haiti. I moved to a very barren area called Matènwa. This community was trying to establish a K-2 school and asked me to visit. The students didn’t even own more than one pencil between their siblings and I thought, ‘If I leave my job in Cambridge there will be more than 100 applicants the next day, eager to replace me. But if I leave here, who will be eager to come replace me?’ That was the beginning of this intriguing journey that I hope many more people will join me on. It has turned into to a national and international movement to revolutionize every aspect of Haitian education.”

You can help Chris give the gift of education to the girls of Matènwa. Your support of GROW Haiti will go towards books, tuition, and a teacher’s salary.

Dr. Cynthia Maung fled Burma in 1988 and has worked tirelessly to provide critical healthcare for the people of Burma ever since.

When the military seized power of Burma on September 19, 1988, many pro-democracy activists had to flee the country or go into hiding. Dr. Cynthia and fourteen of her medical colleagues left two days later. After seven days of travel by foot, she arrived in Thailand and eventually moved to Mae Sot where she established the Mae Tao Clinic.

Since 1989, the Mae Tao Clinic has served the Burmese refugee population, treating everything from malaria and respiratory disease to gunshot wounds and landmine injuries with few supplies and a lot of determination.

You can help Dr. Cynthia aid those displaced by the continuing instability in Burma by donating to supply her clinic for a day. You’ll provide essentials like antibiotics, anti-malarials, vitamins, supplements, and a wide range of other medicines to treat illnesses common to the area.

Cremelda Parkinson Pratt is regarded as a champion in the fight against Breast Cancer in Sierra Leone. Until the launch of Thinking Pink Breast Cancer Foundation, cancer was considered a “taboo” and regarded as a terrible shameful disease associated in some parts of the country as witchcraft. There were so many myths surrounding this terrible but often curable disease.

Thinking Pink Breast Cancer Foundation is working to change perceptions and misinformation about cancer in Sierra Leone, but they are fighting an uphill battle. There is no one trained as an oncologist in Sierra Leone, and the country has only one working mammogram machine.

Despite these challenges, Cremelda and Thinking Pink are working hard to serve their nation and educate people about cancer. This important organization is making sure women who would otherwise not follow-up on possible breast cancer diagnoses due to financial limitations or misinformation about the disease receive the best care possible.

You can help Cremelda and Thinking Pink help women diagnosed with breast cancer in Sierra Leone get the care and medical attention they need.